Home
Golf Rangefinder
Can You Use a Rangefinder in a Golf Tournament?

Can you use a rangefinder in a golf tournament? Although not completely banned, there are regulations. The rules aren’t written on a rock; they keep changing. Amazon Disclosure – Proper Version (Redirect from Custom HTML #4)
As an Amazon Associate I earn from qualifying purchases.
Amazon Associates Disclosure Statement
Line Break
OnTheGolfGreen.com is a participant in the Amazon Services LLC Associates Program, an affiliate advertising program designed to provide a means for sites to earn advertising fees by advertising and linking to products on Amazon.com. Amazon and the Amazon logo are trademarks of Amazon.com, Inc, or its affiliates.
Read More
Show less

For a long time, electronics weren’t allowed in golfing. However, advancement in technology paved the way for further amendment of the golfing rules.

Today, the law allows for the user of golf rangefinders in tournaments. But there’s a catch; they prohibit some features.

You can use devices like golf, GPS, and smartphones with several features disabled.

So, what makes the difference? Why are some golf rangefinders allowed and others banned?

Well, this is a broad topic. However, since you’re already here, we shall go through it together. The rules are stipulated in Rule 14-3.

Can you use a rangefinder in a golf tournament?

This law states that no golfer should access any device, which gives them an advantage over the other competitors.

However, it has undergone a number of amendments over the years. It seeks to offer an average gauge for skills and performance.

Strict adherence to the rules would disqualify most GPS devices and laser golf rangefinders in tournaments. These devices are still used. So, does that mean the users break the law?

This rule saw the first amendment in 2006. The amendment allowed the use of golf rangefinders in measuring distances.

However, it had banned any devices with slope and other unacceptable features. In 2016, the law was changed to allow the use of devices with banned features.

One had to switch the features off. That’s where the leeway to use GPS, and laser golf rangefinders sneaked through.

What isn’t allowed in tournaments?

Of course, the laws have undergone a constant metamorphosis, getting better each day. So, what features go against the rules for golf tournaments?

This is the first banned feature. The slope offers readings for the degree of elevation. Additionally, the feature also helps in detecting the vertical distance on a hilly surface.

While this passes for non-official plays, it fails when it comes to tournaments.

Why is slope reading banned in tournaments? Well, the obvious reason would be creating a uniform playing field. Slope reading gives the user an edge over the other competitors.

This way, they would have some advantage, making the sport unfair.

Of course, the rules keep changing. Who knows, it might be allowed in the future. As of now, slope reading is illegal in tournaments.

This is another banned practice in golf tournaments. One can’t measure the wind speed when in a tournament. Of course, there’s a good reason for that.

Knowledge in wind speed helps one inn determining how hard they hit the ball.

It’d also tell them the wind direction and how much resistance to expect. Of course, that gives an undue advantage for the user.

However, there’s a leeway for this feature. You can check for other weather conditions like thunder and storm.

These two won’t have any impact on your performance. So, you still have a way to enjoy your GPS watch.

Of course, this is like contacting your teacher in an interschool competition. I mean, the teacher will give some tips making you beat the other students.

So, during a round, you cannot contact your trainer. Of course, you can do so after your round.

In a nutshell, most rules aim at offering a level ground for all competitors. Of course, golfing as a sport aims at rewarding competitors on merit.

This is like going into an examination room with your phone. I doubt if your teacher would allow that. The same principle applies to golf tournaments.

You can’t review swing analysis videos while still playing. Likewise, you are not allowed to review swing path technology.

You cannot access your club suggestions or previous data before ending your round. What does this mean? You must be aware that some devices record data and keep it for future use. Some even indicate how far you last hit the shot.

With previous information, you could use it to determine how hard you hit the ball this time. This way, you have an advantage over the others. That’s why this feature isn’t allowed.

Wait, so, what can one do then? Most people worry about the fact that their golf rangefinders already have these features. Does that mean they won’t be using the gadgets? First, these are rules for competitive tournaments.

So, you can still use your gadgets with these features on a different platform. For instance, you could use them when competing for fun or when training.

Can I still use my golf ranger finder in a tournament with these features?

Can you Use a Rangefinder in a Golf Tournament? While one might not use the features mentioned above, there’s an option for disabling them.

So, no cause for alarm, don’t throw away your gadget just yet. If you have a laser golf rangefinder with slope, simply switch the slope off and use the device.

In short, these are the practices not allowed in a golf tournament:

What is allowed in tournaments?

So much about what we can’t do! How about we also check what is allowed in a golf tournament.

No one would question you for measuring yardages to the green, trees, hazards, and others. Of course, that’s the use of a golf rangefinder.

However, getting any other data not allowed would result in disqualification.

Every golf rangefinder offers this function. So, there wouldn’t be any case of unfairness. For that reason, don’t worry when getting the distance to green or any other obstacle.

Although you can’t share details with your coach, you can share it with your fellow players. This isn’t an issue since they are also in the tournament.

Of course, they wouldn’t use the data for the wrong reasons. Neither would they offer undue assistance since they also want to win.

Recording your details like distances, scores, and other important details won’t put you on the wrong side of the laws.

However, these details shouldn’t, in any way, help you in beating your opponents. Of course, you can use them later to access texts, calls, and notifications:

Although communication with your coach isn’t allowed during a round, you can still receive texts and notifications.

In fact, you can pick calls as well. However, this is a rather tricky one, so better be careful.

However, you can access information like a storm or rain. Of course, the two have little, to not, a benefit for the golfer.

In short, here are the allowed practices

Which golf rangefinders are legal for tournament play?

Can you Use a Rangefinder in a Golf Tournament? As we have previously explained. The answer still remains a yes and a no.

However, you must be wondering which golf rangefinders are legal for tournament play. The golf governing body allows people to use the following devices:

However, these devices must fulfill the requirements mentioned above. Failure to which renders them illegal

These are more sophisticated and versatile devices like phones and tablets.

Although they are designed to perform other tasks, they could also estimate course distances. Likewise, the devices must also meet all the conditions listed above.

Can you take a golf rangefinder on a plane?

Well, some people ask this question a lot. It all depends on the state’s regulations. However, I have taken my golf rangefinder on a plane several times, and nothing happened.

Can you use rangefinder in school?

Well, golf rangefinders aren’t allowed in schools by the American Junior Golf Association (AJGA). However, high school associations had to take a look at their rules. So, it differs from different states and tournaments.

Can you Use a Rangefinder in a Golf Tournament? If you had that question, you’re now sorted.

Although golf rangefinders are allowed, there are limitations. However, the latest amendments appear to favor golfers.

Who knows, more amendments could be on their way.

For more golfing tips, stick around! Choosing a Golf Rangefinder – Which Is the Best

As a novice, one thinks choosing a golf rangefinder is just ABC. However, the reality on the ground shocks many. First, so...
Read More Should I Get a Rangefinder for Golf?

Should I get a rangefinder for golf? If you are having doubts, then I am here to cast them out. There’s...
Read More 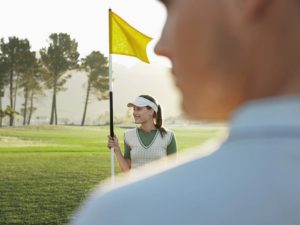 What to Look for When Buying a Golf Rangefinder? For Beginners and Professional

How do you manage a birdie while I always fly the green or settle for duff? Andrew, my friend, shot that...
Read More

Why Use a Golf Rangefinder? How Many Clubs in Golf Bag Including Putter – Knowing Your Limits

It is essential to know how many clubs in golf bag including putter you are allowed to bring, especially if...
Read More What Are The Most Expensive Golf Drivers?

If you’ve been struggling with finding the best picks for a golf driver, maybe it’s time to check the most...
Read More 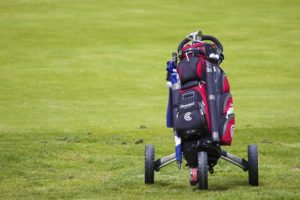 How to Convert Golf Push Cart to Electric?

If you are looking for ways on how to convert golf push cart to electric, I got your back. Of...
Read More

Hybrid vs Fairway Wood Chart – Which Club is Best?

A hybrid vs fairway wood chart is helpful if you ever wondered which golf club to use and cannot decide...
Read More Of course, discussions on How to organize a 14-divider cart golf bag end up in debates. Why is it so?...
Read More When Do Golf Clubs Go On Sale

Do you ever wonder when do golf clubs go on sale so you can score one for less? Well, golf...
Read More How Much Does a Custom Set of Golf Clubs Cost

You’ve probably heard about custom golf clubs, and at some point, it made you think, “Do I really need one?”;...
Read More What Golf Clubs are Made in the USA? Proudly American

We all have heard of Japanese and European golf brands like Honma, Mizuno, and Scottsdale — but what golf clubs...
Read More 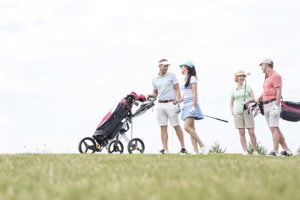 Which Is Better 3-Wheel vs 4-Wheel Golf Push Cart?

3-wheel VS 4-wheel golf push cart - which one should I settle for? Most people often ask me this question....
Read More

Finding the best golf rangefinder reviews for the money is an uphill task. The right information makes the process easier. Of...
Read More Want to have the best budget golf rangefinder? Well, we have got you covered. We all need something that gives accurate...
Read More

What Is the Best Golf Rangefinder? A Complete Guide! What Is Slope in Golf Rangefinder?

A slope could also be the difference in elevation between two points on the course. What is slope in golf...
Read More Can You Use a Golf Rangefinder for Hunting? Golfing vs Hunting